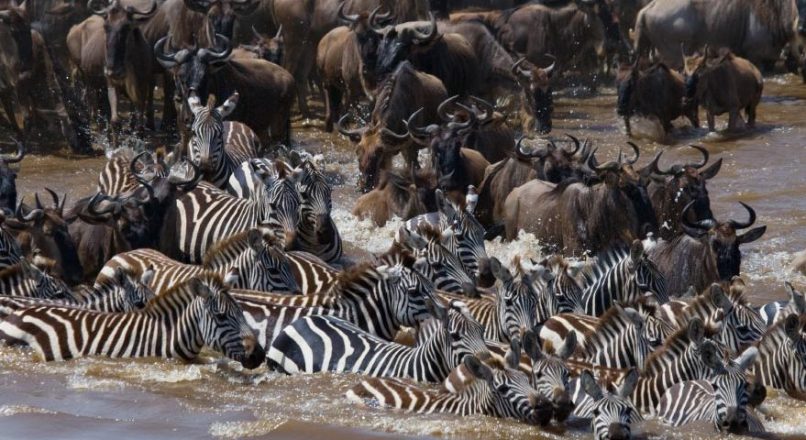 The migration of nearly 2 million wildebeest and zebra across the plains of Tanzania’s Serengeti and Kenya’s Maasai Mara is one of the oldest and last great land migrations on the planet. The movements are dictated solely by the rains and food sources (grasses), with zebra eating the long grasses while wildebeest follow to feast on fresh shoots.

While the herds’ movements are often unpredictable, and tracking them is not a perfect science, their typical movements are illustrated in the interactive map below, which also shows the locations of our camps in each area.

In January, wildebeest and zebra herds continue to move south, mostly along the eastern edge of the Serengeti, toward the fresh short grasses of the Ndutu plains, while much of the migration has already arrived in the southern Serengeti near Lake Ndutu where the animals will graze and prepare to drop their young. Large herds dot the plains as far as the eye can see, and predators watch the herds closely.

While the migration gathers in the southern Serengeti, resident animals, such as cheetah, lion and elephant, are still found in the northern, central and western reaches of the Serengeti and in the Maasai Mara, congregating around permanent water sources such as the Mara and Grumeti rivers, but free of the usual crowds of people. Smaller numbers of wildebeest and zebra can often be seen in the private conservancies bordering the Maasai Mara National Reserve, as there are short grasses there for them to eat.

In February, the calving season is in full effect as huge herds of wildebeest dot the vast grassy plains of the southern Serengeti and Ngorongoro Conservation Area, all dropping their young in a two- to three-week span of time, with predators ever-present and ready to hunt the weak and vulnerable members of the herds.

The northern, central and western sectors of the Serengeti National Park and Maasai Mara Reserve are ideal to combine with a visit to the southern plains, as resident wildlife persists in these outlying areas where territorial predators hunt resident antelope year-round. Resident wildebeest and zebra remain in the private conservancies around the Maasai Mara, eating the short grasses here.

In March, the herds of nearly two million wildebeest and zebra remain fairly stationary, feasting on fresh grasses in the southern plains of the Serengeti and Ndutu, as their new calves grow stronger and prepare to move north. A hot-air balloon safari over the plains is a great way to get a perspective on how truly massive the herds are.

Resident wildlife is found in the northern, central and western reaches of the Serengeti and in the Maasai Mara at this time, devoid of the usual crowds of people. Combining the migration with one of these areas gives a well-rounded view of the Serengeti-Mara ecosystem and a broad variety of wildlife. Rhino may be more easily viewed in the northern section of the Serengeti, and famous prides of lion, such as the Marsh Pride, will remain in their home territory of the central Maasai Mara, amongst other animals.

In April, the herds begin to journey north toward the central and western sectors of the Serengeti National Park and the Grumeti River. Many camps close this month for maintenance, as April also marks the beginning of the long rains in East Africa. With the migration on the move, it can be a good time to stay in the central Serengeti, where camps are often open year-round with resident wildlife.

The Maasai Mara in Kenya offers superb resident wildlife viewing all year and is a great combination with the central Serengeti for a chance to see the herds and other key wildlife species.

In May, the migration pushes northwest into the western corridor of the Serengeti. The herds tend to stagger, with some arriving in the western reaches of the park near the Grumeti River first, while others can still be found farther south and near the central area of the park. Those that reach the western edge first tend to venture into the private Grumeti Reserve bordering the park. At the end of the month, they begin to form a mega-herd again. Some camps in the Serengeti and Maasai Mara are still closed in May while others begin to reopen.

In June, a large migration herd is formed in the western Serengeti on the southern banks of the Grumeti River, with some smaller groups farther east in the central Seronera area of the park. The wildebeest and zebra tend to grow into a mega-herd before crossing the crocodile-filled Grumeti River to continue north. June also begins the rutting, or breeding, season for the wildebeest, creating a lot of activity and excitement amongst the herds, as males exhibit their prowess and fight for female favor.

Toward the end of June, the independent Loita migration arrives from the Loita Plains to the east, congregating on the private conservancies bordering Kenya’s Maasai Mara National Reserve and offering a unique and lesser-known opportunity to see great herds of wildebeest here.

In July, as available grasses are exhausted and begin to dry, the herds move northward for fresh grazing. With some of the herd still in the western Serengeti and Grumeti Reserve, they continue to move northeast in search of greener plains, many arriving at the Mara River and Lamai Triangle in the northern Serengeti in mid- to late-July. These front-runners may begin the treacherous crossing of the crocodile-filled Mara River, while others graze in the northern Serengeti.

The Maasai Mara plains in July are typically teeming with herds from the Loita migration of the eastern Loita Plains. Resident wildlife is found throughout the Serengeti-Mara ecosystem as the landscape becomes drier and animals congregate at water sources. 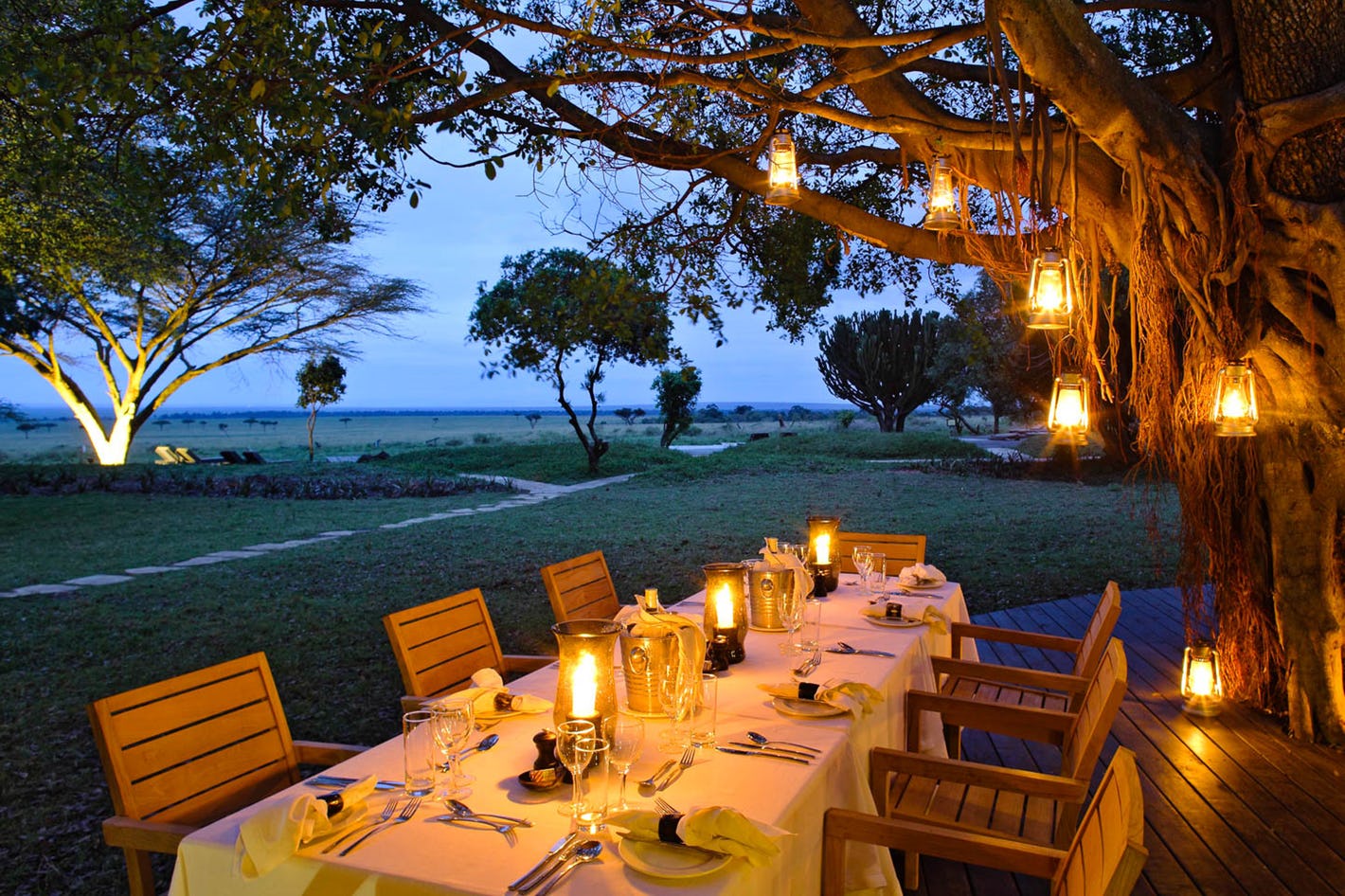 In August, wildebeest and zebra herds begin their annual crossing of the Mara River, which cuts across the northwest corner of the Serengeti and up through the Maasai Mara. They continue in search of fresh grasses on the other side of the river. While herds pour across the unfenced border into Kenya, some also stay in the northern Serengeti, where river crossings, though unpredictable, can be seen almost daily at this time of year.

The Maasai Mara’s exceptional populations of lion, elephant and the annual migration presence make it worthwhile to spend time in both a private conservancy and the central Maasai Mara National Reserve.

In September, the migration herds continue to arrive and feed on the grasses in Kenya’s greater Maasai Mara. Viewing wildebeest and zebra crossing the Mara River in herds is also still a common occurrence. The abundant local wildlife only enhances the overall experience, and this is simply an excellent time of year to be in Kenya.

Sightings of wildebeest herds in the northern Serengeti may also be possible as they spread over the area to graze, and the central Serengeti continues to offer abundant resident wildlife sightings.

In October, the migration can still be found in the Maasai Mara and northern Serengeti as herds continue to graze in large numbers with lion and other predators always in the vicinity. River crossings can still be seen on occasion. As the short rains begin to brew toward the end of October, the first of the herds begin to journey back south along the eastern edge of the Serengeti and Loliondo following new grasses.

In November, the short rains have begun to fall, and the bulk of the migration herds move quickly south with the goal of reaching the short-grass plains once again. The mega-herd breaks into pockets of wildebeest and zebra that can be found in the northern Serengeti moving to the central Seronera plains, while many are found along the eastern border near the private reserves of Loliondo.

As the migration is en route to the southern Serengeti, without many camps in its path, resident lion, cheetah, elephant and other key wildlife are still found in Kenya’s Maasai Mara, making it a great destination at this time.

In December, the migration continues moving south toward the short-grass plains of Ndutu in the Ngorongoro Conservation Area. Some herds can be spotted in the central and eastern Serengeti as they move south, while arly arrivals can be found already in Ndutu feasting on fresh grasses. This is a nice time to see large herds thundering across the plains and beginning to gather in the south.

The ever-present resident animals, famous lion prides, and elephant of Kenya’s Maasai Mara provide an excellent combination with the migration herds on the southern Serengeti plains.